Please feel free to read, share your thoughts, your stories and connect with others!
Post Reply
8 posts • Page 1 of 1

Some background
We just went to our oncologist after pet ct scan yesterday after an year from initial diagnosis. Based on previous pet ct done in June 20 that only said bibasilar atelectasis, the current pet ct report says there are 2 4mm nodules in right lung, non specific but mentioned as interval growth.

However I went to the radiologist and showed him the first ct done during diagnosis which he didn't have access to and then he compared that to the latest pet and said the 4mm right lung nodules look stable since the first ct. Everything else on the report was as expected.
Also latest cea is 2.33

My mother had a surgery in July 20 and it was a full path response. We have also completed 4x XelOx or capeox last November 20 and it's been two months since. I asked the onc today if it would add any benefits to do just the Xeloda monotherpay for 3 months (our onc had initially said that we ll do a 6 months chemo but due to full path response had changed that to 3 months one).. He said it would be more beneficial to do it without break as in 6 months straight even if doing only xeloda for last 3 months and that he would prescribe it now if we want to do it. The reason for me to ask this is after the pet ct report scare.

I'm just in a dilemma if we should do this of course bearing some of xeloda sides or just skip and goto next surveillance scan. Also I am worried, totally like a novice, if doing after break wouldn't cause any adverse stuff like wakeup any dormant cells? Not sure if it can work like that but just some thoughts. But just thinking if it would help then why skip it. Since most people on here do 8 cycles of capeox.

I don't have much input to offer, but here's a quote on lung nodules in case you haven't seen it yet.

"What are lung nodules? Lung nodules or pulmonary nodules are small round- or oval-shaped growths in the lung. These spots are also referred to as spots or coin lesions. Nodules are smaller than 1.2 inches. If these nodules grow bigger than that size, they are no longer a nodule and are considered a pulmonary mass. When it is a mass size, the likelihood of it being cancer is greater.

Nodules can either be malignant (cancerous) or benign (noncancerous). More than 90 percent of lung nodules smaller than ¾ inches are benign. Benign nodules can be caused by inflammation in the lung from a disease or infection. Malignant nodules are often found in people who were/are smokers and are older in age. Overall, most pulmonary nodules are benign.

Nodules are commonly found through x-ray and CT scans. For the most part, lung nodules have no symptoms. Usually, a patient will never know that he or she has a lung nodule unless he/she has an x-ray or CT scan done. A positron emission tomography (PET) scan can also tell if a nodule is malignant or benign. A doctor can also biopsy a small area from the nodule to determine if the nodule is benign or not.

If a nodule is concerning or malignant, the doctor will want to remove it through surgery. Benign nodules usually don’t require treatment. If the patient is healthy enough for surgery and the cancer has not spread, the malignant nodule can be removed."
Reference

Re: Lung nodules on PET/CT scans

Hopepray wrote:Worried a bit, because my mom just had a pet ct scan ... the scan said a 4mm nodule right upper lung. A 4mm pleural based nodule right posterior basal lung are seen that were not present in previous pet ct... A bit worried about this at the moment.

In your mother's recent PET/CT scan report, were there any references to SUV (Standardized Uptake Value) for the two right-lung nodules?

Normally, a PET/CT scan is done in order to get further information on any spots or nodules seen on an ordinary CT scan. If a nodule has SUV<2.0 on a PET/CT scan, then the nodule is considered "benign", but if a nodule has SUV>2.0 then there is cause to suspect a malignancy, or something else like a bad inflammation. Also, if the SUV is very high, then the PET component of the PET/CT scan will light up with a bright spot showing where the radioactive glucose tracer was attracted.

Here is an image that shows a nodule in the upper lobe of the lung that has a high value for SUV: 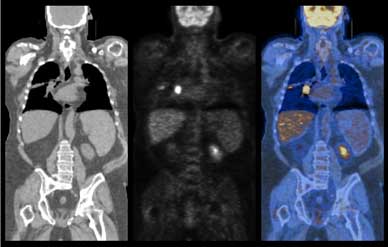 Did your doctor show you any color images like this to confirm or disconfirm metastasis? Three-dimensional color images are available if the doctor loads the PET/CT CD-ROM on his computer and runs the PET/CT scan viewer software. Software to view PET/CT scans on a computer can be obtained free-of charge.

Some reports have mentioned that some doctors only focus on the findings of the black-and-white CT component of the PET/CT scan and they avoid trying to interpret the hot spots on the colored PET component of the scan:

"...Often times the reports are essentially a discourse on the anatomic findings obtained from the CT portion of the study with little emphasis placed on the information delineated on the PET component of the examination...."
Ref: https://www.lifeextension.com/magazine/2012/7/value-of-pet

Thx JJH for more info. There is no mention of SUV max, or any of the pics showing any highlights in the report and the summary at the end of the report says no significant suv uptake.

Hopepray wrote:Thx JJH for more info. There is no mention of SUV max, or any of the pics showing any highlights in the report and the summary at the end of the report says no significant suv uptake...

It's good that the report explicitly says "no significant SUV uptake". This means that the nodules appear to be benign at this point in time.

There are still several issues that are not quite clear to me, based on what you have written so far, however.

So far, it looks like your mother has two 4mm nodules that show up on the most recent scan. One of them is in the upper lobe of the right lung "a 4mm nodule right upper lung", and the other appears to be near the bottom part of the right lung but not inside the lung itself. It was described as "a 4mm pleural based nodule right posterior basal lung" . The report apparently said that these two nodules "were not present in previous PET CT".

However you have also said, "Please note that she had PET CT right before her surgery which didn't pickup these. But the initial diagnosis CT before her nCRT which was done at a different center did note a 4mm ground glass nodule right upper lung" , and "PET CT done in June 20 that only said bibasilar atelectasis"

So, from the most recent PET CT scan it appears that there are only two nodules of concern, but it is not clear to me whether or not they were there on the various previous scans. Also it is not clear whether the previous remarks pertaining to "ground glass nodule" and "bibasilar atelectasis" still apply.

What seems to be new is that the nodule in the lower part of the right lung (4mm pleural based nodule right posterior basal lung) is not considered to be in the lung itself but in the pleural lining just outside the lower part of the posterior basal segment of the right lung (Segment 10 in the diagram below). If this is the case, then it makes the interpretation a bit more complicated, because nodules outside the lung itself typically have a different origin and different prognosis from nodules located within the lung itself.

Perhaps you should talk to your mother's doctor to try to clarify these issues a little more, in particular, whether the second nodule is actually in the pleural lining and not in the lower lung itself. For example could there have been an error in the interpretation of the latest scan? 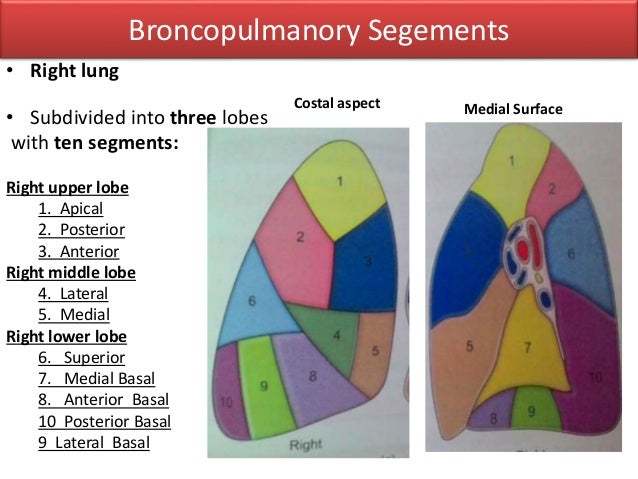 Re: Xeloda mono-therapy after two months break from 4x XelOx

Hopepray wrote:Thx JJH.
That helps. Will wait to see if I can get some input on xeloda mono-therapy

Xeloda Monotherapy
Colon, colorectal and breast cancer
Given as monotherapy, the recommended starting dose for capecitabine in the adjuvant treatment of colon cancer ... is 1250 mg/m2 administered twice daily (morning and evening; equivalent to 2500 mg/m2 total daily dose) for 14 days followed by a 7-day rest period. Adjuvant treatment in patients with stage III colon cancer is recommended for a total of 6 months.
Reference: https://www.ema.europa.eu/en/documents/product-information/xeloda-epar-product-information_en.pdf

With your mom's height and weight you can use a BSA calculator to get her Body Surface Area. Then in the second part of the calculator you can calculate how many milligrams of Xeloda your mom should take in the morning and how many in the evening.

By using a height of 63 inches and a weight of 150 pounds, the calculator will show her Body Surface Area. (Note: In the on-line form you have to first click on the down-arrows to change the height units from centimeters to inches, and the weight units from kilograms to pounds before you click on "Calculate Body Surface Area". Also, you have to enter 1250 in the Drug dosage/M2 box so that the calculator will do the conversion.)

https://globalrph.com/medcalcs/body-surface-area-bsa/
.
"The darkest hour is just before the dawn" - Thomas Fuller (1650)
Top

Yes her initial CT said that she had a ground glass nodule right upper lobe and several tiny cysts lower lobe right.
Her previous Pet didn't say anything about the 4mm ggn. But did say several sub pleural cysts and atelectasis.

So I brought this both to the radiology team's concern and they verified both her old ct and last pet report and came back and said that these things appear to have not changed and is status quo.

However like you mentioned the new 4mm pleural nodule is not in the lung. So I have made a point to bring this up and also follow it up with a ct in few months.

Users browsing this forum: No registered users and 2 guests